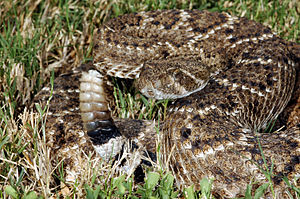 Summer months bring an increase in horse activities and increases the incidence of Rattlesnake bites in horses. Of the 27 species of rattlesnakes in the United States, 11 are found in Texas. The Western Diamondback Rattlesnake and the Prairie Rattlesnake are the most common rattlesnakes found in the western part of Texas where veterinarians treat an average of about 6 – 10 cases per year. Over 90% of these bites occur on the face, primarily the nose, in pastures or fields while the horse is grazing. They can also receive some nose bites when the horse gets curious to the sound, site and smell of the rattlesnake. The second most common bite site occurs on the lower limbs. Rarely, horses may be bitten on the chest, abdomen, upper legs or other locations while the horse is lying down.

Rattlesnake venom contains many myotoxins and hemotoxins.  Localized signs of rattlesnake bites include significant to severe swelling, pain, and bleeding at the bite site, with significant tissue damage. Horses become lethargic and usually have difficulty breathing. Occasionally, systemic signs such as dehydration, fever and irregularities in heart rate and rhythm can be present. Shock rarely occurs. Severity of reactions may depend on the amount and concentration of the venom injected by the snake. Size, species, health, age of snake and condition of its fangs also can affect the outcome of the bite.

When a horse receives a rattlesnake bite, keeping the horse from moving or becoming excited prevents further absorption and circulation of the venom. This also limits further increases in respiratory rate through a horse’s restricted air passages. Most facial bites usually resolve with early treatment but an average of 20% of leg bites can result in chronic problems such as lameness or infection.

Rare long term complications include cardiac disease. Medical treatment is aimed at ensuring that the horse has adequate breathing capabilities. Cut off garden hoses or syringe cases can be placed a distance up the horse’s nostrils to open up the airways. Although this technique can be a useful tool, some horses won’t tolerate it because their nose is too painful and/or they are frightened by the procedure. Medications used by veterinarians include steroids and non-steroidal anti-inflammatory drugs to decrease swelling around the bite site. Tetanus prophylaxis also is indicated. Antibiotics are used as well as local wound therapy on leg bites. Wetting hay and feed for horses with facial bites can help them eat.

This entry was posted on Monday, July 18th, 2016 at 2:46 am and is filed under Horse, News & Updates. You can follow any responses to this entry through the RSS 2.0 feed. You can leave a response, or trackback from your own site.